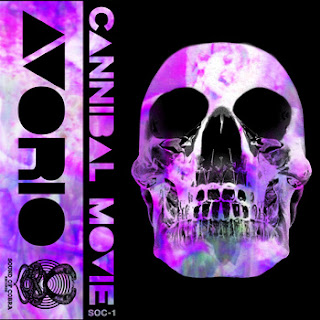 New label Sound Of Cobra sent me this, their debut release from Italian psych marauders Cannibal Movie. Yep, be very wary searching for these guys on Google...

Anyway, its some suitably wigged out psychotropic jams, alienating the idea of vocals and guitar (by not having any) whilst upping the ante on organ and drums (of which there is a lot). Five repetitive sonorous circle jams that is as primal as it is technologically left of centre - a technicolour ritualistic sacrificial rite of passage.

I have to say - I really, REALLY dig Avorio. Its one of the few albums Ive received in the mail in recent times where I wasn't expecting much but within a few seconds my preconceptions were thoroughly shattered. Its one of those weird listens where even though it creeps you out, the incessant tribal rhythms have you bopping along to it.

Maybe its apocalyptic music - an aural equivalent to Sadako's videotape, a true "the music made me do it" experience, whereby Im being brainwashed by the mindblowing sonics on display. You can envisage this in a physical form, played out on scoured VHS, a true video nasty - yet its much more evocative and nuanced than that, thus elevating it about bargain bin bans and into Argento giallo territory. Maybe. Either way, Im hooked. And if you needed a soundtrack for the next meeting of your local cannibalisation cult, these guys have the spellbinding mantras down pat.

I have the entire album streaming below - be sure to get over to Sound Of Cobra and get yourself a copy. Im looking forward to my copy that's for sure. And as a special bonus, I have the second track off it below! Take it home, put it on, space out - just don't let it get the taste for flesh...