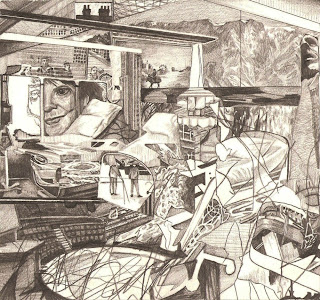 It's been a while since south England label Art Is Hard threw something our way, but then I realised that it was I that dropped the ball! Southampton band Bewilder actually released their EP This Isn't Life, It's Just Stuff - and again the release is something special. Its a interesting release in itself, full of post rock flourishes, woozy dream pop dreams, and references to Uncle Buck and Dwight Schrute - what more could you want? How about the physical stuff, then? Only 20 clear cut lathe finished vinyl pieces were made, but there was also CDs in a hand stamped envelope case. Both forms of the release are accompanied by a zine put together by the band and their close friends featuring short stories, photos and drawings. Nice right? Check out the price then - the vinyl is around 8 squid, whilst the CD is only 2.50! Nuts! You can get it here and here. Digitally, you can snag it for free here - guys, you just keep on giving.

Bewilder - I Wasn't Going To But You Kinda Talked Into It
Bewilder - Would You Like To Talk About A Possible Lunch Trade?
Posted by Brendan T