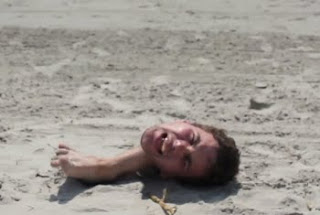 Toby Altman has done it again. The dude from Luftwaffe (what are those guys up to anyway, hmm? Their EP Quiet Summer was one of our faves of last year, and now nothing...) who also goes by the name of Camera Phone continues to play with expectations. Just as I air his track 'Fauntleroy' in my warped dance mixtape the other week, he whips this bad boy out. Named after the creepy guy following the school bus in Rebecca Black's "seminal" pop hit 'Friday', Fat Usher is four tracks of completely warped sounds, warbled loops, echoing vocals, and incredibly entrancing jams. It may all be about regret, but there is nothing regrettable about these sounds - the emphasis of Camera Phone is on creating rhythms from the most unlikely of sources, and then to slow down the grooves in such a manner that the original sounds become indistinguishable. The result is pretty impressive - whilst the RnB via Twilight Zone effects of the titular track have garnered the most press, Im a massive fan of closer 'Still Life' - so Im gonna stick both on here. The EP itself is by far the best thing Altman has done, and can be gleaned from Cave Chorus Records here.