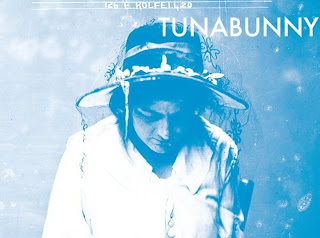 Tunabunny, if you had forgotten already, is one of Athens, Georgia's most kick arse bands - their debut LP last year blew me away. Deborah Harry fronting Deerhoof? Maybe. It was a hell of a lot of fun that's for sure.

Well the band have a second album in the works, Minima Moralia (once again on great lil label Happy Happy Birthday To Me), but before they heave that off the bridge and into our heads, they are giving us '(Song For My) Solar Sister.’ Its much more melodious, the temper tantrums dialled down to a Ritalin drenched fuzz, which gives it all a heady sense of detached malaise that could drop the shit at any second...but cuts off before it can do so. This new barely-reined-in intensity is an exciting about-take for the band, and offers a hell of a lot of intrigue as to what lies in store on the upcoming album. The B-side, 'Airport", seems to straddle both worlds. I really like both, and what Tunabunny are on here.

And lucky for you, Sonic Masala plans to take you on the Tunabunny journey. I hope that there is still some of that spastic ludicrousness left inside these kids, but the step up to the maturity plate is duly noted - and indelibly exciting.

Tunabunny - (Song For My) Solar Sister
Posted by Brendan T