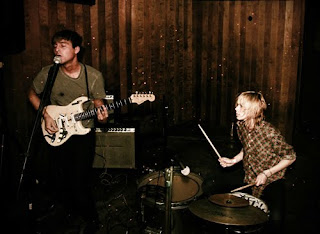 Paul became entranced by Tomorrows Tulips last year when they contacted us about their Optimistic Vibes EP. Over a year ago now, yet that little gem was our first "discovery", so is very close to our hearts. There was a track off it called 'Eternally Teenage', which we also features as their music video. Well, its come time for an album launch, and Eternally Teenage (you could say they haven't thought hard to come up with that name, seeing as its the title of a year old song of theirs, but then again being a teenager for eternity means you can use it whenever you want) will drop July 19 via Galaxia. Tomorrows Tulips are still a duo, still in love, and still offering slacker SoCal beach fuzz gems. Singer Alex Knost still gives off those stoner surfer vibes, probably because that is what he is. Yet in all seriousness, it isnt reinventing the wheel, or even the Rock, but its casual nonchalance doesnt piss me off, so that's my obtuse way of giving it the thumbs up.