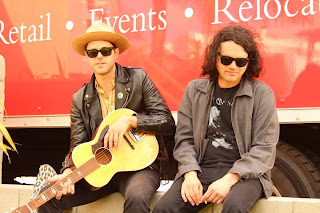 Shawn Foree has been putting out his multinstrumental bedroom project Digital Leather for a few years now, and made his most notable offering with 2009's studio offering Warm Brother (via Fat Possum Records). His new album Infinite Sun harkens back to his more DIY offerings. Its out through Volar Records, which 'Sea Of Hate' is off.

NB - Since writing this I have been down to Rockinghorse Records in Brisbane which is unfortunately closing its doors - another fucking independent store bites the dust! Anyway, I bought up big, for cheap - and was so suprised to find not one, not two, but THREE Digital Leather releases there! I bought Sorcereor, the effort on Goner Records, but Dance Til Dead and Blow Machine are still down there!