Abbe May - Nay, WILL - Design Our Desire 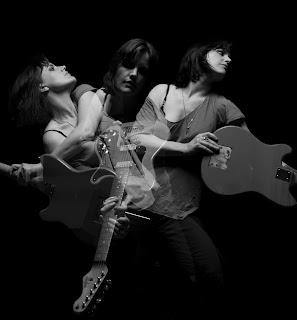 Amongst the long list of bullet points that constitutes my loves, there's one at the top that burns like a beacon - I love me a good woman. Its just who I am - Im only human(ish).

But there is a definitive post script to this love of mine, for what I really love is a female that rocks. But not just rocks (attractive girls in bands aren't enough; my well documented disdain for the Dum Dum Girls should have signposted that...), but really really rocks - can wail on their instruments, rip the balls out of a vocal and sell the whole deal to the Devil with change to spare.

Abbe May is that kind of female.

Design Desire is the West Australian's third album, and whilst it still doesn't harness the power (let alone the sexiness) that May exudes exponentially in the live arena, it certainly should help sell her case that she is one of the most unique rock singer/songwriters in the country, and deserved of wider acclaim across the globe. 'Mammalian Locomotion' and 'Design Desire', the first two singles from Abbe's third album, indicate a new direction; showcasing heavy, scaling riffs and seductively ethereal vocals. May is an intense and primal live performer, capable of slaying an audience with her electric guitar and then stripping it back to a disarmingly intimate delivery. Design Desire itself offers simultaneously heavy and delicately beautiful sonics, the yin and the yang of the enigma that is Abbe May. There are rock influences everywhere, if you want that sort of thing - Polly Jean, Alison Mosshart, even Josh Homme in the grooves underpinning 'Universes'. But she is very much her own woman, and cuts an imposing musical presence that needs to be experienced.

And goddamn she can play the guitar...

Design Desire is out today on Source Music/MGM.