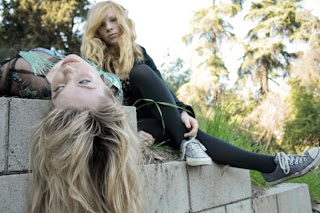 Hail your luck stars, Londoners! Tonight those fine fellows over at White Heat are putting on one hell of a show. Hailing from "a maelstrom of reinvention, reckless idealism, and rainbow-chasing" known as Los Angeles, psych poppers Puro Instinct are hitting Madame JoJo's with locals Echo Lake (who're also launching their single) and No Climate. Puro Instinct used to room with the inimitable Ariel Pink, and the man himself pops up on the track below. Plus, the fact that Puro Instinct are made up by Piper Kaplan, 24, and his 16 year old sister Skylar! They are damned ace, and this should be one killer show. As always, there are tix on the door, just over a fiver, so do yourself a favour and GET THERE!!!