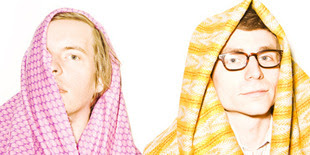 City Center caught my attention last year with their Record Store affiliated EP that in its vinyl edition was one of the sexiest pieces of wax Ive ever witnessed. They have released a longplayer, Redeemer (on K Records), and it's a good if uneven followup. Although much of the same aesthetics that have garnered City Center their murmurous reputation - massive efforts with DIY audacity, digital antics and unorthodox licks of psychedelic whimsy - the result here is more of a severely swinging pendulum, which swings from meticulously created extreme to the other. This give equal amounts of adulation and frustration, for it really sounds as if two albums have been crafted here, cut in half and glued together again. The first half is more dynamic, pop-driven rock, with 'Poppers', 'Cookies' and 'Modern Love' all sinking their urgent hooks in deep. Yet the ambient side of the group is left for the latter part of the record rather than being interspersed throughout, leaving the whole thing feeling top loaded to the point of distraction.

That said, they are a quality act, and most of these tracks are quality on their own. I still suggest you give Redeemer a go - it may surprise you.