Shining Wrays On Some Quiet Yet Medicinal Americans 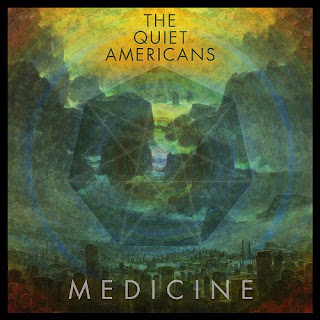 The second of our web of musical mystery comes from a seemingly unrelated email form Luke Giffen, who has been seen in Sleepover Disaster. He has recently formed a new band called The Quiet Americans, also from central California like Fay Wrays...then I noticed that the drummer was one Eli Reyes! Apparently Luke had no idea Eli had contacted me about Fay Wrays, yet they bounced my way within 24 hours of each other. Yet the guys have more than a supernatural bond to Sonic Masala - the recording of Medicine was a family affair, as Eli is married to Luke's sister, and Luke's little brother Ross contributed moog synth to the record (aww, right?). Family brings the best out of many creative groups. Its a different sound that this crew is crafting - combining predominantly short and fast songs with bright melodies and fuzzed out guitar squall. They really love the fuzz! The six song EP Medicine is their first release and is out on local label Coattrack Records (also responsible for putting out Fay Wrays' Strange Confessor). They have also been punching above their weight on the music scene, opening for the likes of A Place to Bury Strangers, The Fresh and Onlys, Royal Baths, and Light Pollution.

Check out Medicine below - and head to their Bandcamp to get it for free!