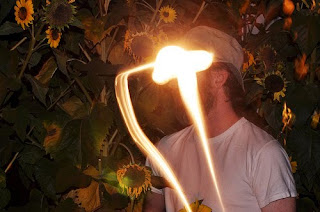 Being a fan of Grails (a fact that can be quite divisive amongst certain friends of mine), it was a matter of course that I would be interested to hear what Ash Black Bufflo had to offer. The solo project of Jay Clarke (of Grails, Dolorean, and Holy Sons fame), Ash Black Bufflo is soemthign of a narrative driven sound, producing instrumental music that is as much a story as it is an aural tapestry. The debut album, Andasol, means "a walk in the sun" in Spanish, and in many ways it epitomises the warmer nature of these tracks to some of Clarke's other sonic outpourings. Clarke also composed the score to the award-winning documentary, Marwencol, a fact which now has me very interested to find out more about it. But back to Andasol - this is an album that is easy to fall into, and get lost in, yet it might take a few listens for some people to get to the stage where they can unlock it for the treasures within. That isnt me trying to placate those friends of mine certain to hate it due to its Grails attachments (you both know who you are), its me saying that this is an involved listen that rewards with continual layers of entrancement and amazement. Except for you, A-Rey - you'll love it from the get go. Thats how we brothers roll.

In-house references aside, Ash Black Bufflo is one artist that is well worth the investment.