The Breaking Of This Illness Ain't Good... 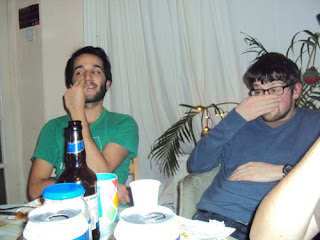 Terrible news this. Brighton noisefucks Illness are calling it a day, freshly after releasing their amazing album Some Vegetable Waste (see what we thought here) - hell, it was almost the soundtrack of my imminent return to Oz! However it ain't all bad - Spencer is going to uni in Canada in September, all very amicable and to plan, and they are aiming to go out with a bang, with lots of UK and Europe touring and a break up album to boot! The release - Break Up Tape - its brilliant as is their way. There is plenty of things to be happy about, plus you can catch them one last time in London at Scar Studios (alongside Depakine Chrono, Nitkowski and more) on Saturday August 6th. Its a massive shame - they bridged the manic maelstrom of Lightning Bolt and Zach Hill with more stringent pop sensibilities stolen from various 90s slacker indie elite - and the result was pretty magic. PLUS! They have archived pretty much everything they have ever recorded on their Bandcamp here - how awesome is that!

Email ThisBlogThis!Share to TwitterShare to FacebookShare to Pinterest
Labels: Illness