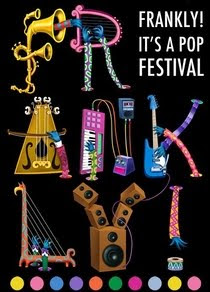 Talk about a stellar lineup… The 2011 Frankly! Pop Festival (held in Brisbane as part of the Brisbane Festival on September 10) is gearing up to host a slew of hip bands courtesy of the focus on Los Angeles hypnagogic pop label Not Not Fun. Whilst previous acts to grace the stage have included High Places, Xiu Xiu and Crayon Fields, curator Lawrence English has garnered the NNF quartet of LA Vampires, Wet Hair, Angel Eyes and the awesome local band Blank Realm to be a part of the innovation. Also along for the ride are members from the Japanese psychedelic pop subculture such as Oorutaichi, Miko and Ytamo, as well as ambient pop queen Pikelet and the ace Twerps.

Lawrence says of the festival, "We're constantly surprised by the amazing ways artists are taking the tried and true formulas and seeing what can be cooked up with a little experimentation here and there. The 2011 line-up is an exciting addition to the festival's legacy. In 2010 we proved that there's more to pop music than people might expect," said English. "Pop can be experimental, interesting and thought-provoking and Frankly! is about bringing together the world's best to remind folks that there's a whole galaxy of sound out there and some of it is pretty damned exciting."

Frankly! Festival is being held at the Brisbane Powerhouse September 10. You can grab tickets here. (NB – this is the same night as Russian Circles, Brisbane peeps! Choose wisely…or go to both!)