Getting Bludgeoned On The White Hills 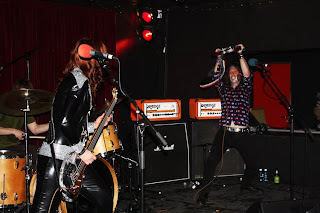 White Hills, along with Thrill Jockey stablemates Pontiak, have always been on my playlists ever since their lightning show at London's now sadly defunct Luminaire March last year (that's a pic from it above). Dave W. and his surreal soiree havent sat idle since then, releasing live DVDs, cassettes and splits over the past year. now it's time for something more permanent, and so we have they second LP, H-p1. I have to say that I don't enjoy this one as much as their self titled debut - although this may change over repeated listens. The New York space-out rockers dispense with ambiance in the normal sense of the word, here exploring the various measure of sound - LOUD sound. It gets a bit...well, samey in the middle third, but this kind of music is made to be experienced in a full sitting anyway, not really in bite-sized chunks. They are very much a live band also - fuck that Luminaire was amazing... Or maybe the issue was the Oneida album - two albums of similar M.O.'s might be too much to take for this tiny mind... Whatever it is, H-p1 is what you'd expect of White Hills - and you can't really wish for much more than that. Plus it will only get better with further listens. Just make sure you do anything to get to the next White Hills show when they are in town - even if it means debasing yourself in the most humiliating notion deemed possible. Ive eaten rottweiler diarrhoea for less... 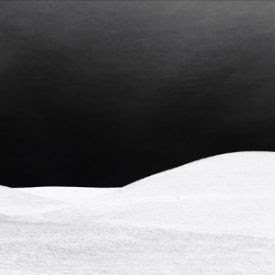 White Hills - The Condition Of Nothing
Posted by Brendan T