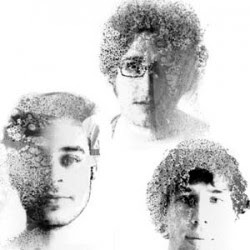 The more I listen to Illinios post rock act The Earth Is A Man, the more I dig it. Why? Because it isn't just a rip off of Explosions In The Sky (although those influences are definitely evident). It also isn't Maps & Atlases' style intricate math stylings (although there's some of that in there too). And these aren't just guitar sound collages (although Black Eagle Child and his ilk must have looked over their shoulders on a number of occasions here). No, The Earth Is A Man is no singular thing. There are connections everywhere - but it's a small world after all, is it not? What is provided are filmic, stylised slices of instrumental rock that cram so much within their relatively small time frames, and do it proficiently and - most importantly - with finesse and heart. Maybe we should call this, as their PR says, "epic math prog filmic instrumental cumulative bearded Chicago Kraut Allman Chrono Eno rock music"? Or it could just be friends playing music together and having a great time. And trust me - you will too.

Name your price, and you can get the album here.

And because its such a beautiful day - Ive seen Mogwai, Warpaint, Modest Mouse, and The Kills amongst many others in the past 24 hours - why not get some visuals to this excellence? This is the video for The Earth Is A Man's second track of the self-titled album, 'You Might Have A Moustache"...

The Earth is A Man - You Might Have A Moustache from Dana Lorraine Pavisich on Vimeo.

Email ThisBlogThis!Share to TwitterShare to FacebookShare to Pinterest
Labels: Black Eagle Child, Explosions In The Sky, Maps and Atlases, The Earth Is A Man