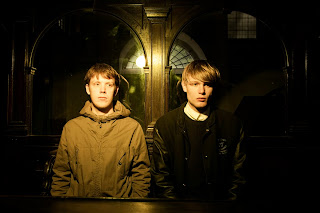 London duo Crushed Beaks impressed last year with their Close-Ups/Sun Dogs 7", but they also put out a split with Torches a little while back that fell through the SM cracks a bit, which is a shame because it was pretty sweet. So I'm not missing the boat on 'Grim', a one-off digital track release through Paint It Black. It's a bit more up front garage pop with some tropical flourishes, rather than a wall of noise, and Matt Poile's vocals are more noticeable this time around, which is a refreshing change of pace. This is hook filled heaven too - a great way to kick off a Sunday.

The two-piece will celebrate the unveiling of ‘Grim’ with a series of shows, including dates at London’s Old Blue Last on 21st June and an appearance at Sheffield’s Tramlines Festival. Expect to see the dusty remains of crushed beaks around the street corners as 2012 steers towards a close.

And here is Crushed Beaks' contribution to their earlier split, a cover of Torches' 'VTOO' - its pretty rad too - download it!