Found A Dead Sailor In The Stagnant Pools 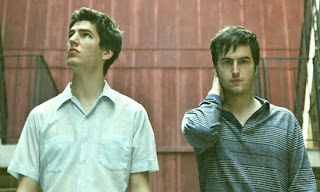 I brought to your attention only weeks ago that rad track 'Consistency' by Indiana brothers Stagnant Pools, drooling over the groove-laden dirge that is equal parts shoegaze swoon and lackadaisical guitar pop, with a smattering of gritty drone to boot. Well they have an album coming up on Polyvinyl called Temporary Room. What's more they have just finished up support slots with labelmates Japandroids (who also have a newie out, more on that later!!!) and EMA, and have more to come alongside A Place To Bury Strangers, Lotus Plaza, Exitmusic and Akron/Family (the last two of which sees them touring in a van they received as a graduation present - thanks pez!). These guys are heating up.