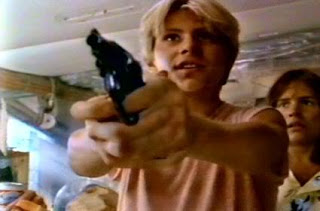 Prepared for some more obscure recordings with visuals? Sure you are. Let's go.

I posted about Desert Spells, last year's hazy trip that was Michigan band Haunted Leather's debut LP here. Well here is an equally lysergic hit in the eyeball with their vid for 'Shapes On The Wall' evoking Alejandro Jodorowsky's The Holy Mountain. The track mines Black Angels at the most dirgey, which they themselves are stepping away from, so this is timely. The track is from upcoming album Red Road - call me mightily excited.

Iroquois Falls is a Toronto artist that has just released an interesting 7" of which she has made videos for both tracks. This is for the B-side, 'The Magician's Niece'. The crunching, the organ, the driving guitar, the Polly Jean meets Patti Smith vocal delivery, all bodes well, but it don't hang together if it ain't good. This is some pretty interesting stuff - intriguing to see where this all heads. Keep an eye on this artist.

I received this cool video in the inbox last week, and although the track isn't necessarily my thing, the visuals sucked me right in. Romare is a London based artist who put out an EP called Meditations on Afrocentrism, a concept based on the idea that a new form of music can emerge by investigating the relationship between different musical cultures through sampling. Samples of songs, speeches, interviews, field recordings and films were carefully chosen and rearranged to explore the connection between African and African-American music. Rhythms from West Africa are integrated with voices from Harlem, conversations about race and identity between writers and ethnomusicologists are constructed, speeches from activists are conjoined with the voices of prisoners. This process of combining preexisting material perfectly marries with the spliced imagery here (courtesy of Hugo Presser).

Finally we return back to Brisbane. Again, another artist I wouldn't necessarily write about (although he put on a good show support Mt Kimbie not too long ago), Arundel is a "dream-pop/electronica producer" who has been compared to Royksopp, Massive Attack, & Gotye. Well, I kinda get it... Much of what he does is produced via live instrumentation, and his collaborations particularly with Kate Jacobsen (Texas Tea) and Claire Whiting (Inland Sea) are pretty sweet. Here is the latest video for 'A Deep Freeze' from his Olive Caves EP from earlier in the year, which features Jacobson and Simon Crossley (Skypilot).