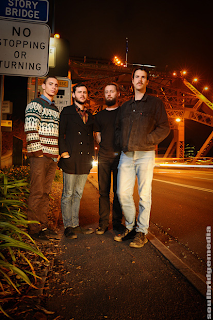 Brisbane's Nikko have been busy with supports for ...And You Will Know Us By The Trail of Dead and Boris, plus having made a brief sojourn to Melbourne. And although one member still lies ensconced in that chilly city, and other projects have occupied some (Ryan Potter's The Scrapes and The Maryettas getting shows around Brisbane), they are about to drag you further down into their darkly eloquent Gothic Outback Western apocrypha as they prepare to drop new LP Gold & Red through the stellar tenzenmen Records (alongside Music Fix).

Opening with the brooding, ominous 'The Child', Nikko envelop you with their atmospheric wall of sound, here perfectly captured by Cam Smith (of Tiny Spiders/Ghost Notes/St Augustus fame, and whose recording efforts include Velociraptor and the mighty No Anchor) in the cavernous orchestral hall of Brisbane's historic Old Museum. In fact, such an environment is perfectly suited to the band's melodic post-rock steeped aesthetic, with that lost country twang in the saddle also (the drawl of 'About The Spirit' perfectly exemplifies this). Aaron Cupples (The Drones, Snowman) and Nao Anzai (Laura, Because of Ghosts) mixed and mastered respectively, and their presence is immediate. Anzai in particular is well versed in these instrumental-based multi-layered sounds. Ryan Potter's voice is beautifully captured here, which isn't an easy task (his deep baritone can lose its rich timbre if not mixed properly). In fact Gold & Red is epic in every sense, the noisy moments are incredibly emotive, the quiet moments offered enough space to dance to its own tune without feeling perfunctory. 'Never Danced' is one of the most beautiful songs they have ever created, whilst the chugging rush of 'Dark Eyes' is a locomotive of smouldering tension. The title track is the most likely to evoke Western epics like Deadwood or The Proposition in its plaintive plinks, the itch before the storm, and it is the perfect example of how clever and evocative these guys' compositions are. 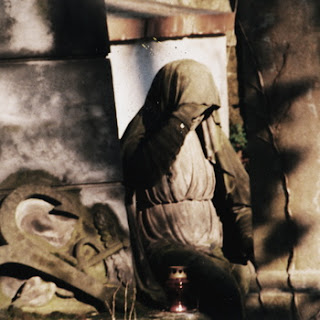 The album is out on CD soon, and later on gold & red vinyl - I'm gettin' me some o that! They are also launching the album at The Waiting Room on Saturday June 23, as well as having an in store at Tyms in July before embarking on a national tour.

Email ThisBlogThis!Share to TwitterShare to FacebookShare to Pinterest
Labels: And You Will Know Us From The Trail Of Dead, Because of Ghosts, Boris, Laura, Music Fix, Nikko, No Anchor, Snowman, Tenzenmen Records, The Drones, The Waiting Room, Tyms Guitars, Velociraptor