It's Not Hard To Make An Artful Family Portrait 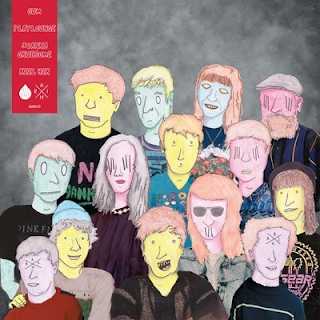 Those wily sons o' guns over at Art Is Hard Records have a juicy release out (aren't they all?). Surprisingly only their second vinyl release, Family Portrait is a four band split between Grunge pop heathens Gum, Cardiff rough and ready indie types Joanna Gruesome, noise pop duo Playlounge and super sweet faux-tweesers KEEL HER, with each band contributing two tracks. These four bands are part of a greater "movement" in southern England, one where bands bond strongly, cover each other's songs and even swap members from time to time. And despite the disparity of the tracks on paper, this is a surprisingly cohesive record, chock full of effortless hooks and rambunctious melodies, all with the grand design to get people moving. If only all family portraits were this luridly addictive, rather than akin to getting a vasectomy with a blowtorch, then that old cliche of world peace may be just that little bit closer to reality. Maybe these four bands should tour the hotspots of the world...

You can pre-order Family Portrait here. They are drip-feeding these tracks onto Soundcloud, so listen below to what great stuff these kids have to offer.