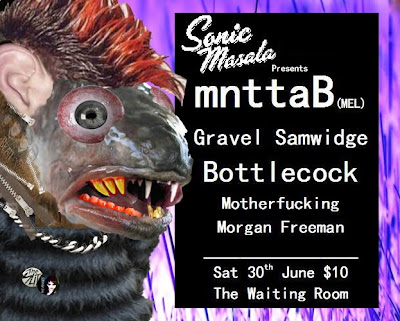 So this is tomorrow. One more sleep. Or you can go no sleep. I won't endorse it, because your body is gonna get pummelled by the likes of mnttaB, Gravel Samwidge and Bottlecock. But also these cretins, Motherfucking Morgan Freeman. Starting out as We Are Librarians and delving in more bedroom pop, sample heavy meandering ambience, this duo have beefed up their intent and decided to play actual shows for once. Their last show was also a Sonic Masala slamdunk, and they were beautifully shambolic, some noisy pop in all the right places. Expect more of the same tomorrow night. It could be one of the last chances you will get to see this band as is, and it would be a shame to put such a killer moniker to bed just yet without some fanfare. I don't have any sonics to lay out for you - just trust me that they are good.

And providing the mortar that will bind the whole night together is DJ Micronations, who will be leaving his beautiful Anonymeye persona at home and bringing the bling, showering you all with tunes of dubious monetary cred. It's at the Waiting Room from 8pm, just bring a crisp $10 bill and whatever liquor is your poison. See you there!
Posted by Brendan T