Sonic Youth By Any Other Name Still Sounds As Sweet 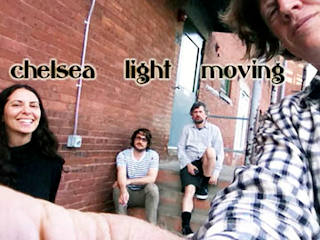 Want the best solution to overcoming a Death March Monday? I have it.

The biggest news to come out of the weekend was the unveiling of the first track recorded by Thurston Moore's new band, Chelsea Light Moving. It's a six minute number called 'Burroughs', and it is close enough to the Sonic Youth we know and love that, combined with Lee Ranaldo's solo outings, makes it a little easier to know that the New York gods haven't left us. The band has Moore out front, and running the rest of this well-oiled engine are Keith Wood (Hush Arbors) on guitar, Samara Lubelski (Jackie-O Motherfucker) on bass and John Moloney (Sunburned Hand Of The Man) on drums. Moore's iconic guitar scrawl and purge is present and accounted for, as is the artistic connections (the lyrics are based on the last words of amazing Beat author William Burroughs). Another track has been promised for the end of the week - yay! So divulge, OD on this - and come out of your slumber for the new track on Friday.