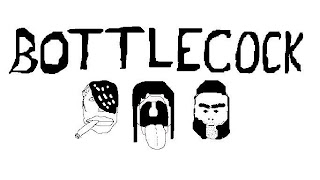 Two more sleeps until the greatest 2012 end of financial year party ever, and Bottlecock are raring to rip into it. The local trio are steeped in grunge's afterbirth, sounding like early Magic Dirt yet with even more heroin. They have an elongated song that lovers of punchy grunge music hate, but I love. They are a sight to behold. They are some of the loveliest people Ive ever met, although they look like (and probably will) punch you in the face because you are wearing a Nirvana T-shirt. They just played in Melbourne last weekend with Penguins, another amazing noisy racket of a bunch, but also mnttaB - so they are primed for destruction. Above all else, they will melt your face off and give it to you in a Pablo Picasso Paster of Paris mould. That's worth $10 in itself.

Check out the deets to the Sonic Masala part-A here. Here is a funny write up about mnttaB from Nite Fields/Lost Race Records' Danny Venzin for website The Thousands. If that doesn't get you hot and bothered - then we just ain't compatible.
Posted by Brendan T