Scaring Friends Til The Spectre Gets Its Fill 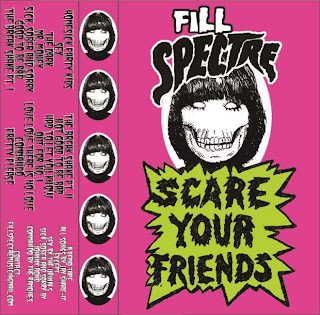 Last year I was a pretty big fan of Toronto degenerates Pow Wows and their Nightmare Soda LP (check out what I thought here). While we wait for something new on that front, Pow Wows guitarist Jay Share-It has given us this - Scare Your Friends, a cassette of demo sessions he recorded under the moniker Fill Spectre. The crazy thing about this isn't that it is good - that was a given in my opinion, despite some of the songs really struggling against the DIY tracking limitations - but how disparate these fourteen songs are, and how well it all holds up. Swinging in genre focus from incessant Cramps love to mordant lo-fi folk to garage swagger to industrial 80s industrial New Wave, Share-It manages to inexplicably hang it all together. This is worthy of a proper release, not just a 99 (count em...) personally made cassette roll out. Nevertheless, word on the street is that he is putting a band together to tour the songs. Great news indeed. But until then - come here and get yourself a tape. It's worth every penny.