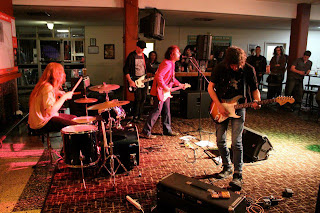 Marching out the bands from this Saturday's Sonic Masala show, and next up on the catwalk made out of crumbling Deutschmarks we have Gravel Samwidge. Led by the affably irascible Mark Spinks, the band have been around since 1989 when they formed in Sydney and shook the shitcan with the likes of Lubricated Goat, Munroe's Fur, King Snake Roost, and Tex Perkin's Butcher Shop before relocating to Melbourne in 1990, where there dirty grind garnered palying time with the brilliant Venom P Stinger. In 1995 they won a Triple J Unearthed competition, which helped them to actually put some shit out, but not make money - if they had it they would burn it just to keep warm. But seeing as they didnt have money for warmth, they relocated to Brisbane in 2001. In 2009 they came out of a six year orgiastic hiatus to shoot everyone in the ear with their debut LP Nonchalance (through Turkeyneck Records). And whilst these outsider dirgemongers may have put out a "retrospective" in the form of The Old Tapes last year, they are launching new material in 2012 in just another public display of infernal domination. For the best trick the 'Samwidge ever pulled was making people believe they didn't exist...

Combined with mnttab founder dik's connections when playing with Bastard Kestrel (they toured with Killdozer. KILLDOZER!!!), we have a wealth of experience on our hands to help bring about a monetary Armageddon. Get keen - it is this Saturday, with Bottlecock, Motherfucking Morgan Freeman and DJ Micronations all offering their wares! Try out this demo recording to indicate where they are kinda at now...