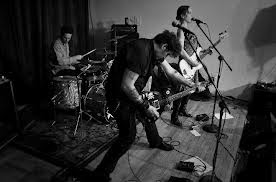 Came across this self-titled album from Boston's Z*L the other day (out now through Midriff Records). it reminds me a little of Mudhoney, a little of Bruce Springsteen, a lot of the resurgent adulation for 90s guitar rock sensibilities (see Parquet Courts, Milk Music, Cloud Nothings...I could very easily go on). It's a very solid album, and has me wondering - why the throwback? And why am I so pleased that such a thing exists? Because for me at least, not only did I grow up on this stuff (You Am I's first album Sound Of Ever, Girls Against Boys, even Nirvana if I must, were the stuff of wasted teenage days), but the discordant noise these guys create touches a nerve, lain dormant due to shifts over time for even more atonal sonic destruction, or the modern world's predilection for clean and pretty guitar lines and "rock". Z*L sound...honest. Its roots is in the working class, in blue-collar Americana, in slaving away. They aren't pretending, experimenting, confounding, conforming - they are just being. For a while there, such an existence was forgotten - I'm glad to see it flooding back.

Z*L can be gleaned here - a very solid release.