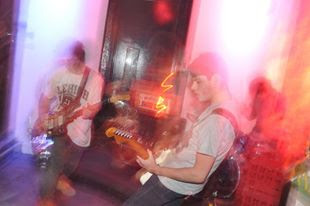 I've been listening to the White Walls debut Self-titled for a few months now and it is still right up there as album of the year for me. I have a feeling that the upcoming shows at the Crowbar on Friday, 7 June (next weekend, for those playing at home) and at Tym's guitars (the best goddam guitar shop in the entire world) the following day for a free in-store will be up there on my live list too.

I caught up with Dylan from the band for a chat:


First of all, congratulations on the album, it’s a fucking fantastic piece of noisy craftsmanship. For me it really captures the hopeful side of world-weariness; a sunlight through the fringe kind of deal.

Thank you. It's really nice to hear good feedback on the record.

No worries. A lot of people up here [Brisbane] are really looking forward to hearing those doom guitar swirls live. It’s a sound that really fits well with the lyrical content: dealing with loss or regret, but in a way that’s more cathartic than depressing.

I think you have summed up the feeling of the record perfectly.

Going into it did you have any particular notions about what you wanted to convey?

Although we didn't consciously set out with any particular notion, there is definitely a familiar feeling that flows throughout.

Can you go into a bit more depth about the cover art on the album; it’s a very intriguing choice.

The cover art for the album was done by a good friend of ours; Gus Lord. He was actually working on something else initially, in a similar vein, but then came across this picture that he accidentally got paint on and built on that to create the final design.  It was perfect! We liked the fact that it was intriguing and also felt it suited the music well.

I definitely agree with that. As a band you seem very keen to talk about other people’s stuff that you think is worth getting in to, between the playing, writing, listening and sharing, it’s pretty obvious music plays quite a big role in your lives.

Music definitely plays a big role in our lives. The Melbourne music scene is thriving these days. It’s very exciting to be a part of it.

Yeah, the Melbourne music scene seems to be really kicking along at the moment. I get a sense of a sort of cross-pollination making for a vibrant and healthy environment for the bands.

We play with friend’s bands regularly and at the Gasometer Hotel more than enough - It’s almost like a second home. So our social life pretty much revolves around music, on top of the general listening enjoyment.

You must be stoked about getting on the Release the Bats line up.

We are extremely stoked on being asked to play ATP! It's a huge lineup of bands we like. Can't wait!

Tone and volume are pretty central (even to the sake of ‘worship’) – when you start a new song do you have a way of irking out or describing the sounds you want, and how long will you spend finding the right tone?

We are rather obsessed with tone, haha, this healthy obsession has grown since we started this band. We have a good idea of how we want new material to sound these days. Recently our setups have grown and we have now perfected the guitar tones we want at this point in time.


Does anyone have any secrets with their setups at the moment? Personally, I’m very keen to hear how you got the epic guitar sound in ‘transmission’.

There's no real tone secrets kept from anyone that has seen us live. Basically comes down to powerful guitar amps. The transmission guitar tone was a combination of death by audio fuzz pedals through an orange OR120 and a JCM800. This was pretty much the setup for this record. The next record will involve new and old setups.

The absence of bass guitar is something people often note about the band – was it a conscious decision at conception to leave it out? Does it impact on the song writing process?

The lack of bass guitar simply came from Fuj and myself both being guitarists when we started out and alongside Rory it just felt right. We figured if we could create a full enough sound then we wouldn't need a bass player. Some of the new songs have bass parts written in which are played on guitar.

New songs, eh? Can we expect anything anytime soon?

Got a second record in the works, which we will be recording late July, so lots to look forward to.

Get your hands on a copy of the album and the split 7" with Deep Heat (both out through the fucking incredible Poison City Records) here.
Posted by Unknown