It's A Common Life In Surf City 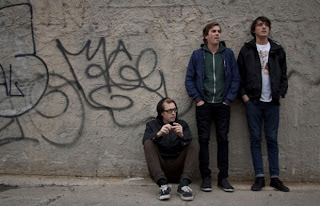 We here at Sonic Masala quite enjoyed New Zealand band Surf City's last album, Kudos. They have another on the way called We Knew It Was Not Going To Be Like This (genesis for title - a snippet of conversation overheard in a crowded South Korean bar - brilliant). The excellent and Antipodal guardian Fire Records (Blank Realm, Scott & Charlene's Wedding, Lower Plenty) are pushing it, which can only be a very good thing. The first track released off it is 'It's A Common Life'. Now, it's pretty grim today here in Brisbane. I work next to an army barracks, and today they have had army choppers going back and forth over my head, probably innocuous, yet still foreboding. Yet the warm fuzz of 'It's A Common Life' helps to shut the shit out, a swirling guitar pop gem that glimmers defiantly amidst the murk and the muck.

Leader Davin Stoddard has been around the traps since Kudos - holed up in a basement in NYC, teaching English in South Korea, lots of isolated moments both without and within. It really sounds like it's paid off in spades - I'm really looking forward to this one... We Knew It Was Not Going To Be Like This is due out in August.