Sonic Masala Presents A Double Whammy Of Shows!! EXHIBIT B 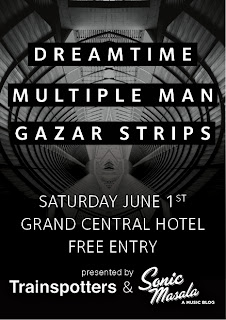 The second Sonic Masala show this weekend takes place on Saturday at the Grand Central Hotel, in conjunction with Trainspotters. It marks the triumphant return of local psych lords Dreamtime, fresh from their US jaunt where they ruled Austin Psych Fest, grace the pages of Impose Magazine, and spent all the hard earned. The trio (sometime foursome) just announced they have snagged the highly coveted local support slot for the legendary Bardo Pond when they come to Brisbane in August too which is further cause for celebration. They are supported by the bucolic excellence of sibling androids Multiple Man, and the cantankerous merchants of phosphorous sneers Gazar Strips. It promises to be another killer showcase of burgeoning talent, plus its free entry, and it's right next to the train station. No excuses then. Check out more on the event here.