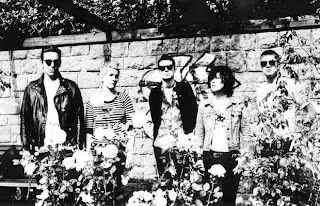 San Diego outfit Crocodiles keep spiralling further away from their batshit no-jazz Plot To Blow Up The Eiffel Tower days, as new album Crimes Of Passion attests. Brandon Welchez and his cohorts have been about embracing and eschewing the garage punk-pop mantras of the past few years ever since they dropped Summer Of Hate back in 2009. Yet if 'Cockroach' is anything to go by, it's still a retro-view sound, more akin to early Raveonettes (especially their Pretty In Black era) and a smattering of the genesis of BRMC than anything that is going on now. Both of these reference are bleeding obvious too - especially seeing as Sune Rose Wagner is on production duties here, their last album Endless Flowers felt like a Raveonettes cast-off (in a good way), and Welchez holds an air and a sneer not too far from BRMC's Robert Leven Been, leather jacket and all. I've always been a bit of a fence sitter with Crocodiles - enjoying their output whilst unable to put a pin into why its any better than the myriad other acts that permeated this fetid earth. Maybe its that their overt, obvious touchstones hold a place in the genetics of my musical tastes. Nevertheless, I await the August release of Crimes Of Passion (out through Frenchkiss Records - pre-order here) with anticipation.