Giving Up On A Nude Beach 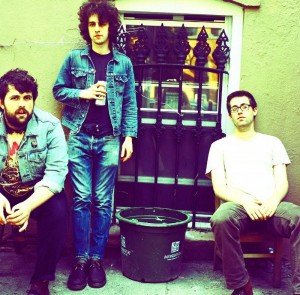 It isn't enough for me to premiere Slonk Donkerson's new track; I have to delve into another Brooklyn band's release that shows a fiery predilection for 90s rock attraction. Nude Beach brought out a pretty great record last year with II, completely irreverent and fuzziness of the warmest kind - leather jacket cool with a heart of fairy floss. Their latest release is a 7" on Other Music Recording Co due out in July, and it is a little cleaner, a litter shinier, yet still as careless as ever. The pop that courses through the 7" has a rough edge, a working-class rambunctiousness, that makes it tougher to crack, to find faults with. The trio is still a little too shambolic, a little too erratic, for their tunes to anchor a pivotal moment in a HBO season cliffhanger - but give them time. Nude Beach have soul to go with their garage edginess, and that'll get them far.