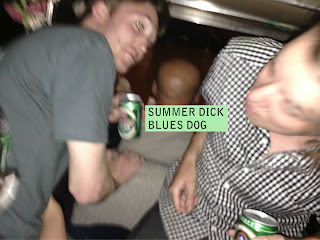 Man. What to say about this record. Made by ex-pat Rhys O'Loughlin from Shanghai duo Pairs, and his mate Marcus Hobbs (you may remember their band Bang! Bang! Aids!) under the moniker Summer Dick, Blues Dog is nineteen incredibly verbose tales that have been pulled verbatim from the guys' back-and-forth emails. So what you have is out-of-tune warblings about glory holes, travel insurance, Soundwave revellers, pets, record labels, bogans, well dressed Japanese people, being railed for not going to see Iggy Pop - basically two dudes shooting the shit, in audio form. O'Loughlin hinted at these kind of incredibly strange leanings with Pairs' last album Eltham Join, but here has captured the banality and hilarity that often co-exists within the conversations between long-time buddies. And some of it is enthralling - and then there is the song played to the tune of 'While My Guitar Gently Weeps' that references concerns of dog shit seeping through old shoes... Blues Dog won't be for everyone - this is something made by mates to amuse themselves - but this experiment is bloody funny, whilst providing a few bona fide lo-fi gems. Check it out.