First up is Heavy Deeds, whose Light Lunch EP came out on Old Blackberry Way Records yesterday. It's decidedly throwback, delving forty years into the past to rake its fingers through the pastoral dirt of the sun-bleached, hypnotic West Coast of the early 1970s. It's clear that the group owe something of a debt to likeminded wanderers such as Galaxie 500, but seeing as Dean Wareham is content to delve into that band's small oeuvre without adding to the legacy, why not give the acolytes a shot at the title? Its a great calling card, an introduction in a candle-lit room, slightly inebriated on the vice of choice, as the sun dives for the horizon. You can get Light Lunch here. 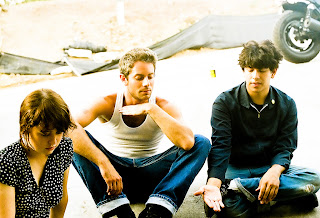 We have mentioned Gospel Gossip in the past (here, in fact), yet I wasn't expecting to love their self-titled debut quite as much as I do. Alternating between the pastoral whimsy that permeates Heavy Deeds above, to more jangly pop, to coalescing sheets of distortion and electric squall, all bled through with a warmth and substance that invariably is left behind in favour of stylistic flourishes - I'm surprised Gospel Gossip (also out through Old Blackberry Way) hasn't had more glowing plaudits thrown its way. OK, some songs feel a little open-ended, maybe even undercooked - but as a whole (and in the instance of 'On The Edge' or 'Simpler Times', some bona fide classic pop tunes) this is an incredibly attractive and addictive effort - in the same realm that Rational Academy was in a few years ago before their final, heavier phase (a local reference, I know, but better than the standard "shoegaze Fleetwood Mac" mantras that get used). Listen to two of the tracks below, and buy the vinyl here.