Saturnalia Overdose In The Wheat Fields 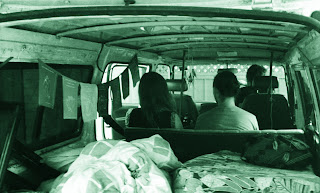 I've never been to the Blue Mountains. That sounds ridiculous, I know, but I have seen more of Eastern Europe than I have of the Eastern region of Australia (and absolutely nothing beyond the western borders of Queensland). Still, I imagine the Blue Mountains to be a beautiful place of tranquillity. And probably of hallucinogens.

Wheat Fields doesn't dissuade me of such a premise. The young band have instilled a woozy sentience to the tracks on their Saturnalia EP that feels at once fresh, bent, pastoral and psychedelic. And like most hallucinogens, these songs take a while to hit, then just when you think it isn't working and you've been sold a dud, the melodies make sense and you are irrevocably lost. Can't complain with that.

Saturnalia (fittingly named after a pagan ceremony from Ancient Roman times) can be gleaned through Octopus Pi Records here.