Friday Cover Up - Songs In The Key Of Bob 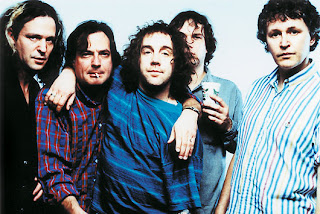 To finish up the week, I'm looking at a 7" compilation that isn't exactly a covers release, although it fits tenuously within the mould.

Songs In The Key Of Bob is the first official release from Charlottesville, Virginia label Hibernator Gigs Records. It features seven original songs from seven bands (a couple, such as Invisible Hand and Naked Gods, having graced these hallowed halls), all written and recorded in the style of DIY legends Guided By Voices. As you would expect from such an approach, the songs vary in fidelity and ambition, yet all achieve the purpose they set out to reach. Te idea stems from a moment when Adam Brock (Borrowed Beams Of Light/Invisible Hand/Weird Mob) started to re imagine the titles of theses and journals (some included Cream of the Jesters and Popular Dogs) he was sorting in a library warehouse into GBV titles. Brock held onto the best titles he found, circulated them to some of his fave bands to pick one and write their best GBV interpretation, and voila, this bizarre ode to the Dayton, Ohio gods was born.

Rather than pick a favourite, I'll let you dive into the entire thing, see what tickles your fancy. I do like Borrowed Beams...'s 'Stone Cutters Journal' though (couldn't help myself). You can pre-order this (on blue vinyl, no less) here.