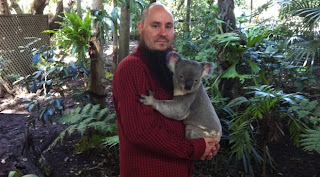 Keith Fullerton Whitman is a key figure in the underground electronica movement, primarily due to his involvement in the evolution of IDM. The Boston experimentalist has never stood idle either, manipulating his own frameworks to craft anything from harsh synthetic noise to more expansive realms. I had the please of interviewing him last year when he was in Brisbane - you can read the article here - and he is a super sweet dude with such an interesting stance on many musical genres, aesthetics and personalities, I could have spoken with him for hours. He is super prolific too, and his latest endeavour is this split LP he has done with Belgium's Floris Vanhoof (out through Shelter Press next week - you can pre-order it here). It shows Whitman at his most playful, and possibly indirectly marking his collage as one of his most accessible also. The linchpin of any Whitman creation is that he builds things from the ground up, and this is augmented here by his insistence on using purely analog synths. Vanhoof complements Whitman opening up by condensing, a droning yin to Whitman's neon electronic yang.