Durf's Up and Down and Out 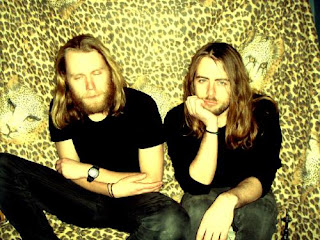 I like the name Harvey. It's actually the name my wife wants to give our first born child (should it be of the male variety). And I'm pretty cool with that. Not all cool, though. I prefer Dylan, after Dylan Thomas,  cause he wrote Do Not Go Gentle Into That Good Night and he once pissed in a pot plant side of stage at a poetry recital. Frail deeds, indeed.

The Beardy Durfs rage a little, but there is a resignation somewhere in there too. The guitars in Harvey are fuzzy but not bitter, the vocals scratch against the surface but never to tear it. The feel is lying on a well-worn leopard skin rug rather than a leopard. "Yeah," you think, as you run your hand over it, "it happens to the best of us, buddy." The lights in the tunnel (of the toy train set) will eventually go out, but the little red one on the amp is still shining right now.

Add The Durfs aren't just what you get with Harvey either. Bitcoins is another great track off the album they've just put out through Pad and Pen Records (who are doing a bunch of REALLY cool shit). Bitcoins is fucking swell. Try it, and who knows, it might even save your soul for a bit. Before you pass mildly, but a bit more happily, away.

Email ThisBlogThis!Share to TwitterShare to FacebookShare to Pinterest
Labels: Pad and Pen Records, The Beardy Durfs