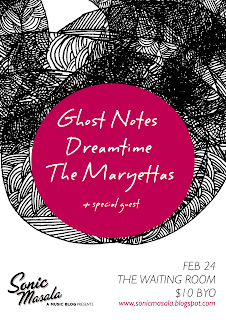 The Sonic Masala shows roll on, and tonight we delve into slightly more familiar territory. It's funny that I haven't put on a truly psych-entrenched band on until now, but Dreamtime are certainly the best band to open the account with. I was a big fan of their debut self-titled 12" last year, plus their slot in a Gin Club show around May last year was pretty special, so this will be a good show to catch. What's more, they are playing first due to work commitments (damn you Black Bear Lodge! Actually, don't - I like to blow money on White Rabbits when Im feeling like a Waylon Jennings vinyl fix...)!

Next up is The Maryettas, an outlet for Ryan Potter to present some of his sunnier tracks that don't fit the doom-laden goth noir stomp of Nikko or the elegaic instrumentals of The Scrapes. Normally in solo form, Potter tonight is joined by fello Nikko member Jackson Briggs and Brock (all the way from Goondiwindi no less! We drag in the big guns!) in what will be the world first electric performance! Special times indeed!

Then we have special guests Dingo's Baby (what a name), the "new" project from Dreamtime's Zac Anderson. Backing up from the earlier slot, Anderson and his cronies promise psych-punk-vomit-enlightenment (my words...). I have no real idea, other than to expect something special, regardless of what quarter of shambolism this one stumbles into. Could be the show of the night.

Closing us out is Ghost Notes, the eloquent instrumentalists that wowed all and sundry with last year's By Cover Of Night. They are playing witha truncated lineup, therefore offering yet another unique set. One of the members is The Waiting Room's very own Cam Smith, who knows this enue inside out, so expect the sound to be silky to the point of being invasive. Golden.


So come down. Once again it's at The Waiting Room, it's $10 and it's BYO. And hopefully it will be brilliant as the above artwork, done once more by the delectable Joanne Thies. This will be a great night!

PS The next night on March 23rd is yet another show on a very crowded Friday night, so we are going to strive for some special inclusions to drag you away from the other shows. Expect prizes, giveaways, maybe even a karaoke machine. Ill do what it takes to make you love me...
Posted by Brendan T