Maps & Atlases Beware And Are Grateful For Winter 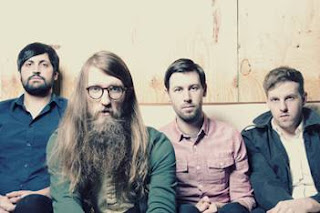 Can you believe that Maps & Atlases have only had one proper album out? God, it feels like they have been around forever, and with their many EPs it's easy to forget that 2010's Perch Patchwork was their debut (I actually thought it was their second LP until only last week...oops). Well they are about to double that account when they release Beware And Be Grateful on Fat Cat Records on April 16. The Chicago act are teasing us with what's to come with 'Winter', something that mirrors their tight kinetic pop aesthetics, yet offers some nuance that piques the interest - exactly what a teaser is meant to do! Frontman Dave Davison claims the band came up with 'Winter' during the previous incredibly cold Chicago winter. "The song contrasts memory and the perspective of winter as a season of possibility and creativity with the bleak, stillness of winter nights in the Midwest." Interesting, right? Check it out below.

If you are in London you can catch the band play the new album a day after its release on April 17 at the Garage. This will be a solid gold show - grab tix here.
Posted by Brendan T