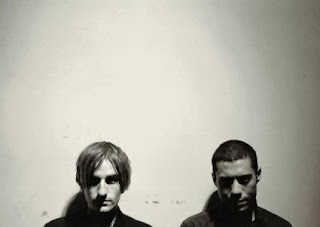 I'm still not wholeheartedly convinced that I like Royal Baths. I mean, the Brooklyn-via-San Francisco band tick the right boxes - dark, brooding, garage based tendencies, drone tinged rock, a love of Spacemen 3... Yet I can't quite get them. Whether it's because I think/thought they're style over substance, or that they are/were a little over-hyped, I'm not sure. I wasn't enamoured with their debut Litanies (on Woodsist), but I listened to it quite a bit anyway. Weird.

I'm equally flummoxed by how much I'm enjoying them right now. I find their songs to be fairly insidious in how they squirrel under my skin without my notice or permission. It kinda hurts my head, because I can't put my finger on it, yet there it is, on repeat, making me happy and maudlin at the same time. Their new album, Better Luck Next Life, is coming out through Kanine next week, and it will be interesting if there is a similar sensation to the first. Likewise, I'll keep you posted as to whether it bewitches me the way the first one did, or if I genuinely dig it (or genuinely loathe it - nothing is off the table here...).

UPDATE - Royal Baths will be playing in Brisbane! Yep, they have lined up Woodland for Thursday March 29. I think it's time I settled my love/hate stance once and for all...