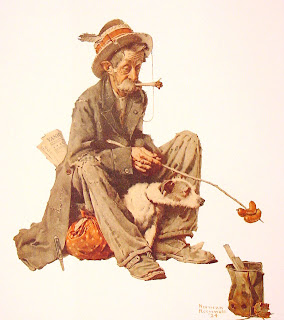 Who needs a break? I can hear your shouts from here! I do too, although people may not guess it - my increasingly accurate physical resemblance to an elegant hobo is raising eyebrows and rashes both. So here are some choice cuts from Thrill Jockey, who look to have us covered once more in 2012...

But before we get there, if you remember, I really enjoyed Dan Melchior's Assemblage Blues record last year. The man is nothing if not prolific, and he has some good stuff coming out soon. This vid has been available for a little while, but its a fair summation of how Melchior does his shtick (it's also on a 7" put out by SDZ Records). Love him or hate him, he is true to his idiosyncrasies... (NB - I love him).

Here is one band I had never heard of until TR sent me this clip. Rhyton are aiming to liquify your bones inside you so you become quivering bags of mush. Their bass played is from Psychic Ills for Chrissakes! Their self-titled debut sounds pretty killer, by the way - grab it here. And while I'm at it, here is a track you can have on top of the vid - happy Friday yo!

Jason Urick has melded dub and drone into a delectable tapestry on his latest, I Love You. Here he has pared the static noise to create something otherworldly, something akin to High Wolf in some respects, which is always welcomed, but there is something...warm about this record that is great. Anyway, here is the clip. Bliss out folks...

To finish off today, let's veer out of the Thrill Jockey stables, but not too far. Sennen sound like they would fit right at home, so I'm placing them in the meadow adjacent. The UK band are releasing their Vultures 7" in March, which will be on heavenly white vinyl - pre-order here. Their upcoming album Lost Harmony looks to be a sweaty palms kinda release - I'm itching for it already.

NOW GET BACK TO WORK!!
Posted by Brendan T