This Tough, Troubled Romance Is Sadly Over... 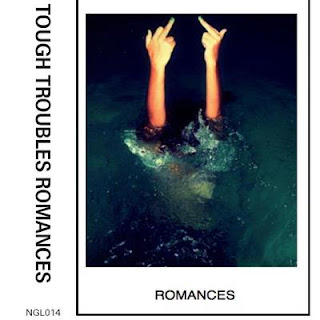 Last year I mentioned the excellent cassette Illnesses by London based subversives Tough Troubles. Based around detailing a
condition, an illness, the onset of a disease, a hereditary syndrome,
a chromosome mutation, it was a deliberately obtuse listen, yet when given the time and effort was an incredible hanger-on, almost like a tapeworm sapping your energy whilst making you hungry for more. Now it's time to say hello to their new release, Romances - and also goodbye, as the trio (which includes two Aussies) call it a day.

As before, the dark synth/cheap drum machine/distorted vocals/post punk dirge remains intact, but the band maintain that this is an album dedicated to love - ever tangential relation to the rather large subject matter, anyway. As before, it is also incredibly good, and baffles as to why this must end. We need more new wave raconteurs that know how to subvert rather than pander to past glories by bands much better than themselves.

Negative Guest List were to be responsible for putting Romances out, until the untimely death of its editor Brendon Annesley in early Feb at the tender age of 22. Such a strong and original advocate of music in general, and outsider, truly driven acts in particular, it's a incredible loss. I may have never been a fan of his band Meat Thump, I really enjoyed his zine and the realness of his passion, something that is omitted far too often today. Therefore Tough Troubles have instead put it out digitally here. At least try it for this sad postscript. Its a great album worthy of everyone's time.