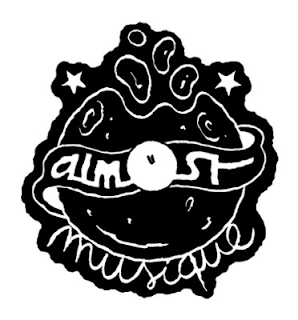 Paris-based label Almost Musique have set up a 7" series that features new and unreleased material from new, promsing bands from all around the world. The most notable of these acts to appear in the series so far (to SM acolytes, at loeast) is Vancouver's Shimmering Stars, their throwback doo wop guitar pop never sounding better on this, their Ghosts Past EP. Furthermore, the band have a cover of the excellent 'Hold On, Magnolia' and are donating 10% of the proceeds to Jason Molina to help out with his financial and medical maladies, all the more reason to buy it. The other two acts to appear thus far are also exciting prospects. Hhappiness (that is not a typo...) hails from Sweden, and their brand of woozy slacker pop is perfectly implemented on double A-sides 'Bananas' and 'All Kinds Of Trouble'. Then we have France's own Arlt, and this baroque act really spin the wheel on 'Le Pistolet', playing around with conventions and holding their tongues firmly in their cheeks, although B-side 'Chien Mort, Mi Amor' is a superior track in my humble opinion. These are great pieces of wax, and with more in the pipeline (including the next one from a Manchester band called Money), it's an electric project from a devoted label. Check it out.

Shimmering Stars - When I See You Again