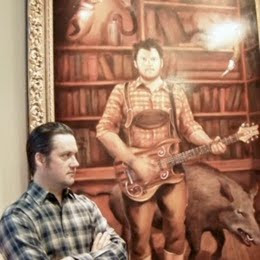 Isaac Brock. I really do love this frenetic, boozy, headcase of a man, even if his main musical outlet Modest Mouse has lost a touch of that inexplicable spark (although last year's EP No One's First And You're Next showed MM on the upward curve). One of my all time favourite albums is The Lonesome Crowded West, although I initially came to them through The Moon & Antarctica (thanks to Jo, in turn thanks to Andy, in turn thanks to Amy - the beautiful daisy chain that is the sonic equivalent of 'paying it forward'. Oh, and The Moon & Antarctica is also fucking amazing). When I saw them (only the once thus far), they played Doing the Cockroach and Trailer Trash, snd even though Brock wasnt as manic as I had been led to believe, it was mighty fine.

But there is more to Brock than cryptic screeching and awesome guitarwork. Take his side project Ugly Casanova. Why the inverted commas? Because UC's only album, Sharpen Your Teeth, came out way back in 2002. So it was more of a one-off (albeit brilliant) endeavour...until now.

Brock has recorded 8 songs (most new; one a reworked version of a Sharpen Your Teeth track) for doco 180 Degrees South, which features songs by Shin's James Mercer and Jack Johnson amongst others, put out by Johnson's Brushfire Records. Its a mighty exciting time when Brock puts anything new out, and you can call this current batch of tracks as a mini Brock album if you like. Either way, the Modest Mouse trick (AKA inexplicable smiles and salivation), once dormant, is kicking in again...

And just cos Im generous - and its Sunday - here's some Modest Mouse: