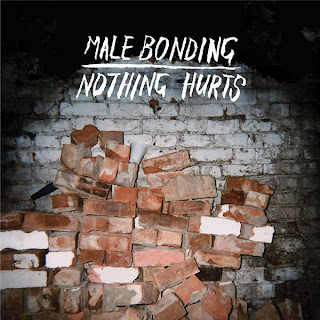 This review has been a long time coming. Nothing Hurts, the first long player from Dalston trio Male Bonding, perfectly emulates their rise and rise over the past 18 months, where they have gone from literally a party band to supporting the likes of Vivian Girls, HEALTH and Fucked Up, to being the poster kids of Upset The Rhythm, to being on everyone's lips and in everyone's ears (not literally - well, I can't say for certain, I dont know the guys personally, but let's just say this is all figurative). 15 songs. 27 minutes. Every track is killer. There is no room to breathe. So much guitar, hooks, chantable lyrics, and wanton jocularity. I listen to this and feel how I felt when I first heard Japandroids' Post-Nothing - an overwhelming sense of joy that such a ramshackle piece of heaven could ever come into existence. It's amazing that two records could land of that same ilk and calibre only 12 months apart - but it has happened. There's enough DIY punk energy swagger ('Paradise Vendors'), pop hook sensibilities ('Years Not Long'), duets with Vivian Girls ('Worse To Come'), slacker rock ('Nothing Remains') and moody atmospherics ('Franklin') to fuel other bands' entire career spanning back catalogue. It certainly is a difficult claim to make - and also a seemingly insurmountable feat to surpass. Its nothing original, per se - but it is the perfect timecapsule of now, the proper definitive noise pop collective that will prove most other wannabes false. So until that 'difficult 2nd album' comes around, revel in the sounds of three Londoners playing their instruments for fun, making music for shits and giggles, and providing an album that all can enjoy ad nauseum. Something that is truly special.