Pleasure Is A Liar... 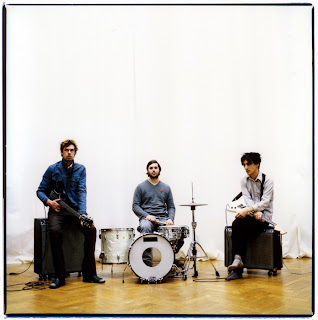 Sisterworld is still the front runner for my best album of 2010. Liars are fucking inimitable, and they have barely stepped a foot wrong in their entire career - paving their own way, shit or shine. And they have more to impart on the world, whether they want it or not.

The B side to latest single 'The Overachievers' (which we showed the disturbing film clip of last month), 'Pleasure Is Boss' is very, very, VERY good. How this didnt make the cut for the final album is beyond me - its another killer chunk of bass-driven menace. How can something so dark and offputting be so enticing? I guess it explains the allure of the Dark Force...but not of hayden Christiansen. He is still so clearly shit - is he even acting anymore? Or is he washing windshields with crumpled up reviews of the last flop he was in?

Ahem. Segues aside, this track is amazing, and further amplifies the necessity still of buying up bands' singles releases.

(NB - this post gives me pause - do Sonic Masala readers desire a mixtape of our current fave bands/albums/singles of the year, halfway through? Leave your comments at the door please...)