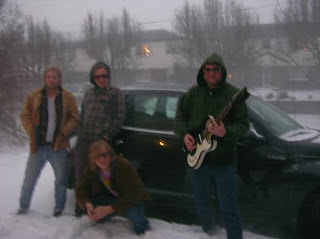 Siltbreeze has steadily built itself up into one of the most exciting labels on the planet. With acts such as Times New Viking, Sic Alps and Naked On The Vague on its roster (also Guided By Voices ?!?), expect to hear a hell of a lot more of what they have to offer...like right now!

Eat Skull have been dishing out a scuzzy as fuck noise pop formula for a few years now, alongside fellow Portlanders and Siltbreeze stablemates Psychedelic Horseshit (although PH take the cake in shambolic - don't worry, we'll post in due haste), and have inadvertantly found themselves on a wave of popular music...and yet somehow left behind in the slipstream. Crystal Antlers, Wavves, No Age and their ilk are gaining monumental popularity/notoriety. However Eat Skull deserve just as much of the accolades - even though they probably dont give two shits either way.

1st album Sick To Death really got things rolling, showcasing a band that could grab all of their favourite musical genres and put it through a shiny meat grinder to produce grisly slabs of murky gold (that sounds absolute rubbish, but listen to 'Beach Brains' followed by 'New Confinement' and you'll be swayed). 2009's follow up Wild and Inside was still awesome +, but didnt have the immediacy of its predecessor, despite the incessance of the organ on pop-tart of death opener 'Stick To The Formula'. You can definitely hear bands like the Clean in there - just not as clean. But still cleaner than before - even if less clean is cleaner...

Fuck, let me put it this way - Eat Skull are great. Really really great. Their abominations of pop, punk, garage rock, art rock, and scuzzy no-wave somehow add up to priceless soundbites that can be embraced wholeheartedly - and you will embrace them. They are criminally underrated. Chase down their albums, become devotees, and...eat some skulls...

Eat Skull - Stick To The Formula