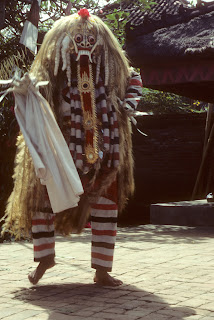 Do not go to Bali.

Wow, a rather strong statement to make, even if Sonic Masala does not have the clout to bring down the entire Indonesian tourism industry...yet...

But the statement is not meant to be literal. For no one in the world is safe from Rangda, the new collective 'supergroup' that is eviscerating eardrums everywhere via their latest LP, False Flag. Made up of Comets On Fire/Six Organs of Admittance dynamo Ben Chasny, percussion master Chris Corsano and Sir Richard Bishop (of Arizona noise wizard trippers Sun City Girls), Rangda (monikered after the Balinese witch doctor both reviled and adored for her chaotic veagence - see, I was leading somewhere with all this) are a full throttled noisefest, sludging guitar rock of monumental proportions. And they are not trying to paint their wagon in any other fashion - from their own name to song titles such as 'Bull Lore', 'Fist Family' and 'Serrated Edges', these boys are here to tear your being to the ground and devour the child within. Seriously scary stuff then - and immensely satisfying.

But that little grab of words doesn't do False Flag justice. Ive had it in my possession for over a week now, and every time I listen to it I am drawn more and more to it. Its not just the volcanic fury inherent in every bludgeoning sound that makes me salivate - it is the innate intricacy, the soul that writhes within each track, that is equally if not so more enchanting. It is a fucking awesome record, especially for the incendiary drumming of Corsano - what a fucking god! - so imagine catching them live? It would have you throwing your own child into the blender just to appease them.

False Flag is out through Drag City now. They played in London last Thursday, same night as Liars, Male Bonding and my book launch. Suffice to say that last Thursday was not particularly fair to all those bands, what with the hordes of avid readers keen to get their mitts on my grubby novella - but hopefully Rangda will (dis)grace us with their presence in the very near future - including the Godspeed You Black Emperor-curated ATP in December...