4AD Crowns Insanity As Genius – And The World Agrees? 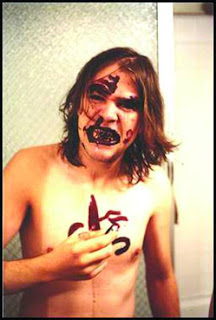 Ive used the term ‘cracked genius’ a few times when describing the left of left of left field meanderings of various musical entities, but none deserve the crown moreso than Ariel Pink. Conversations with Simon and Scott last Friday about some ‘live gigs’ that he has performed here in London in the past few years alluded to a hobo who sang along karaoke style to his own recorded songs – lead vocal track still intact – and the burgeoning distaste of his antics by audience members and even his own sessionists. Yet both claimed that these shows were some of the best they had ever seen, just because they were almost too crazy to be believed.

Now it seems that Ariel Pink will no longer be content at showering his insane genius to dingy hellholes, and is about to do a Daniel Johnston on us all. 4AD somehow saw a marketable enterprise, placed Pink with a band, and now Ariel Pink’s Haunted Graffiti have released their debut album, Before Today. And everyone is saying that Pink IS a genius – that the album has garnered stellar reviews and that he is the godfather of lo-fi home recordings that has flooded the musical airwaves over the past few years. Funny ol world innit?

I will probably get in some shit here – but I don’t get it. Ive read some reviews of the album, and of Pink, and the guy sounds fucking interesting – as far as reading about him goes. Meeting him, hanging with him – that sounds like an endurance event. Listening to him though falls somewhere in between for me – a ho hum, ‘I get where he’s coming from…sort of’ mentality. Before Today holds some merit for sure - the opening track 'Hot Body Rub' has some serious funking attitude to burn - but the fanatical foaming at the mouth that hipsters are generating doesn’t seem to add up in my opinion. Hey, Im happy to be proved wrong though guys…

But even in saying that, Ariel Pink still holds that animal magnetism that only evangelists and the charismatically insane (or both) that draws you to him, and everything he says and does. 4AD have inexplicably struck gold with giving Ariel Pink the big(ger) bucks, and for better or for worse, I await to see what this warped musician will concoct next.

(NB - Ariel Pink's Haunted Graffiti are playing at Scala on Tuesday 15th June - see the madness for yourself...)