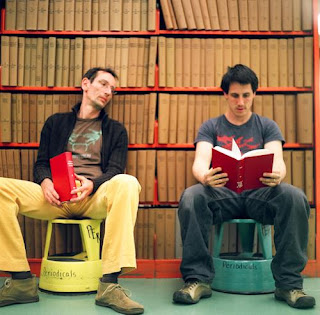 Damn those Decibel Tolls folks! I had this post gestating overnight while I had a well earned sleep, and they go and steal it from under my nose! Ah well...

My mate Andy is a big Books fan. Me, Ive been a mere dabbler. But after my sojourn back to Oz back in April, Andy's musical influences have seeped into my playlist, and my heaspace, taking up residence and refusing to get out other than by extreme duress, and with the battering that my eardrums and brain have taken in past weeks Im not sure I could take it - so the Books remain.

They are an intriguing, beguiling bunch, The Books - newly crowned chillwavers notwithstanding. They are their own beautiful beast, having inhabited their own niche for so long that it seems damn rude to allow anyone else to encroach on their territory. They are the alpha males of their domain - a regal stag atop a snowcapped peak at early morn, antlers outlined against the growing grey light...or something like that anyway.

New LP The Way Out is out next month - if you havent immersed yourself in Books, then dip in now and start the rabid anticipation for this beauty's release.

PS - this new track is mega rad of death.

The Books - A Cold Freezin Night
Posted by Brendan T

Email ThisBlogThis!Share to TwitterShare to FacebookShare to Pinterest
Labels: The Books, The Decibel Tolls